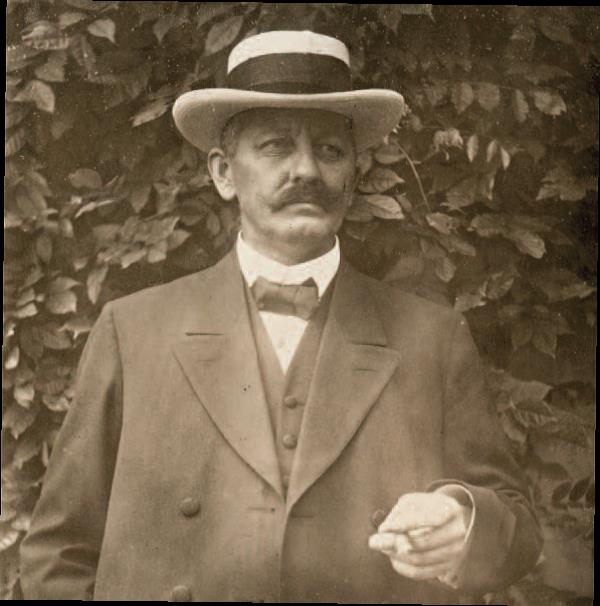 Alt-Stralau 50/51
Stralau was once an independent municipality. Here, where children now come to play, stood Stralau City Hall. Acquired by the town in 1905, the building had originally belonged to the Richard family (of gardeners) and became the city hall one year later. Until that time, the town administration was housed at nearby Alt-Stralau 52/53.

The town of Stralau, first mentioned in 1288, was annexed by the twin cities of Berlin and Cölln in 1358. The Berlin Council thus became a guardian of sorts, accompanied by all the relevant laws and duties. The town mayors, as local representatives of the Berlin government, were required to collect taxes and fees and could exercise police powers.

As of 1874, Stralau, Rummelsburg, and Boxhagen were administered together as an “administrative district,” and the head official of this district was headquartered in Stralau. The local town head occupied political office in Stralau as mayor. Robert Stöcklein was one of the first to hold this position in Stralau, and together with Julius Tübbecke, he researched the early history of the peninsula. He was succeeded by the industrialist Paul Rengert and the fisherman and gardener Ferdinand Gutzeit. In 1893, the “Kracht Era” began: Louis Hugo Kracht (1865–1928) became the next head of office and stayed in this position until the end of the German Empire. Albert Bahrfeldt (1846–1918), owner of the Grauert company, served as Kracht’s deputy for many years. Master craftsmen such as the boat-maker Deutsch, as well as local businessmen and teachers, served as representatives in the local administration.

At the start of the Weimar Republic, the Social Democrat Fritz Pöhling held the post of local administrative head for a short time. By that time, glass-workers and the first two women – with the women’s right to vote finally achieved – also held seats on the local council. Both women stemmed from the now divided labor movement: Hanna Hünecke from the KDP (German Communist party) and Auguste Hupfeld from the SPD.

In 1920, Stralau became part of the Berlin district of Friedrichshain. The administrative building at Alt-Stralau 50/51 returned to being a place of work and residence. Today the building no longer exists. In 1912, the streets of Kracht- and Bahrfeldtstraße received their names, with both politicians still alive to see it.